Dear First and Accelerated Students,
Welcome! We celebrate your joining the ranks of students studying for ordination as interfaith ministers. Please know that we are here to answer questions or if you need a resource for your ideas.
Your first year of seminary is a time of awe, confusion, joy, introspection and a myriad amount of other feelings, all of which will lead you to where you need to be to do the work you are called to do.
Be gentle with yourself as you journey forward this year. Remember that there is no growth without chaos and conflict. Even the tiniest of seeds must push itself through a ton of dirt before the Sun shines on it.
We pray that you will enjoy, grow and be blessed by this wonderful journey we are taking together.
Blessings of Love and Peace,
The Second Year Students (Class of 2013)

Posted by The New Seminary at 7:17 PM No comments: 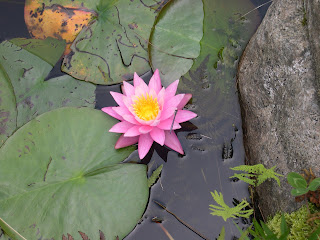 Shari Landeg, TNS class of 2014, asks an interesting question in one of her blog posts.  She writes, “…how can we define and perceive altruism from a spiritual perspective, and what is at the heart of its application in the world, in terms of the evolution of humanity?”  Shari answers the question by sharing thoughts on the Buddhist “development and practice of Bodhicitta - ‘awakened mind.’”

Through this practice, one realizes that in being one with all, in seeing our shared humanity with all its bumps and bulges, we are able to grasp the idea of the endless possibilities we, as humans, have for change.
Like a lotus that grows out of the mud, up into the sunshine above the water, we can grow into awakened beings. We may remain with our feet in the mud of chaos, in the murky depths of pain, suffering and heartache, but we can hold our heads high in the light of loving-kindness, universal compassion and limitless potential.
Biography:
Shari Landeg’s spiritual journey began in her early teens, alongside her mother’s.  She would tag along to various groups, meetings and spiritual organizations, which opened her mind to a wide range of beliefs, philosophies and ideas.  She grew up strongly connected to her indigenous heritage, and held a deep reverence to the environment, specific localities and natural landmarks considered sacred to Maori culture, which fed her passion for all cultures, peoples and sacred practices generally. She encountered the Tibetan Buddhist path in her twenties and had a primary role in the establishment and running of a Buddhist center in Tasmania, Australia.
She has an academic background in Asian Cultures and Societies, and has taught in various educational settings.  She is currently writing a memoir about her time living a Himalayan Refugee community while she researched the roles of Tibetan women.  Her passion for interfaith has grown over the last few years, leading to her recently accepting a position as Administrator for Interfaithnet - a social media forum started by a group of Interfaith Ministers living and working in the Asia Pacific.  She promotes interfaith ideals by researching, writing and corresponding with a diverse range of faith based organizations in the region, and through her personal blog; onelightmanylamps.blogspot.com.
Her ordination in 2014 will be the culmination of a long held dream.
Posted by The New Seminary at 8:50 PM No comments: