Visiting sacred sites does necessarily mean the need to take a trip to the far-reaches of the world.  Often, close to home, there are sacred and ancient sites that go unnoticed.  Here are some that exist in New England, many of them accessible to the public.


Folks in and around Salem, New Hampshire don't often speak of Mystery Hill, unless asked directly about it. Like most people who live close by a historical site or attraction, Mystery Hill has become commonplace. However, the site offers visitors a step into the ancient past - a past where monoliths heralded the change of seasons and witnessed ancient religious ceremonies.

Scientists and researchers believed that the 30-acres at Mystery Hill were used by Bronze Aged Celts back as far as 3000 BP. Due to the lack of household and gravesite artifacts, researchers believe the area was used chiefly for ceremonies. People still use the monoliths as an accurate yearly calendar.

Many of the characteristics of Mystery Hill are unique. For instance, there is an Oracle's chamber with a shaft that opens up underneath what is believed to be an altar. When someone talks into the shaft, the voice is heard amplified and distorted around the altar.

In Putney and South Woodstock, Vermont, there are several structures known as "Calendar Chambers." These chambers are thought by some to have been built by the ancient Celts due to inscriptions found on the stones. As evidenced by their name, it appears that the purpose of the chambers is to use them as calendars. Calendar II located in South Woodstock is aligned to the solstice.

The controversy over who built the Upton chamber, a huge stone structure resembling a beehive, is still hotly debated. Located in Upton, Massachusetts, the structure has long been a focal point for archeologists and dreamers, alike. Some researchers believe it is merely another root cellar created by a colonial farmer. However, others believe that the structure could date back to 700 - 750 CE because it mimics accurately, structures found in Ireland built around the same time. In addition, the entrance, which is long and narrow, is aligned to the summer solstice, an architectural element found often in Ireland and the Great Britain.

Another archeological site that inspires myth and mystery is the Gungywamp of Groton, Connecticut. The 100-acre site has artifacts and structures that date as far back as 2000 BC. In addition to stone rings dating back to between 280 and 630 C.E., Gungywamp has several "root" cellars or calendar chambers, which accurately signal the equinoxes. Native American artifacts have been found throughout the site, along with those of early settlers.

Unfortunately, not all ancient sites are recognized as such. The discovery of an entire First Peoples (Narragansett) village in Rhode Island several years ago has cause great upheaval in the Rhode Island village. The site has been described by archeologist as a "nationally significant" discovery is on land slated for development. The significance of the find is that the entire village, homes, granary, burial sites, etc. lie just under the surface. Archeologists, who were asked to do a preliminary excavation of the site, found numerous artifacts along with the remains of the village. They have estimated that the village dates back to around the 1300's.
In May 2011, judges of the US Court of Appeals in Boston ruled against the contractor; thereby opening the way for the First Peoples village to be preserved.

A trip to Foxboro State Park leaves a visitor pondering the who, what, when, where, why and how of the over 25 different rock formations found throughout the park. The park is located on the highest area between Boston and Providence. This coupled with the numerous rock formations, leads archeologist and researchers to believe that the area within the park is "sacred land."
There are six different types of rock formations found at the park - aligned boulders, dolmens, standing stones, perched boulders, prayer seats, and stone piles. Each of these formations alone sets an archeologist's heart thumping; finding six different types in one location is overwhelming.
Theories as to who placed the stones in their present locations, why they are there and what they were used for are open for discussion.

The New England states are among the oldest in the history of our country, however, the ancient historic sites found in New England indicate that the history of the area is much older than most of its European ancestors ever realized.
Note: Many ancient historic landmarks are on private land. If you wish to view them, please take the proper steps to gain permission. Also, please do not move or remove stones from any of the sites. Remember, for those who once used these sites, they are sacred. Please treat them with the greatest respect.
Linda M. Rhinehart Neas, M.Ed. is a member of the TNS class of 2013. She is a writer, poet and educator.  She lives in Western Massachusetts with her life-partner, Roger.

Posted by The New Seminary at 10:26 AM No comments:

The Fires of the Senses

The following post, originally found at www.opentothedivine.com, was submitted by the very gifted, Scott Robinson (Class 2013).  Scott led those attending the 2012 Retreat in an inspiring Kirtan.

God is the offering, the One Who offers, and the fire that consumes. ~Bhagavad Gita 4:24a 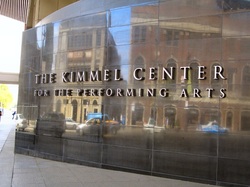 I was walking through Center City Philadelphia on my way to a panel discussion on Creating Sacred Music. As I was feeling neither particularly sacred nor particularly musical, I cast about for a way to get into the right frame of mind. 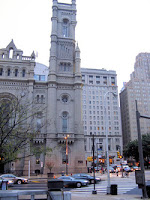 Looking at all the colorful sights of the city, I remembered how, when my children were babies, everything I saw, heard, smelled or tasted would remind me of them. “Clare would like those flowers,” I’d think; street buskers would make me wish Sophie were with me; foods brought one or the other kid to mind, depending on their taste. 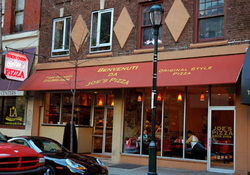 What if I could broadcast my experience directly into their minds, I thought, so they could experience my walk vicariously? Then I realized that we are called upon, in the Bhagavad Gita, to do more or less exactly that—with God as the audience of our sensory input:
Some yogis perfectly worship the demigods by offering different sacrifices to them, and some of them offer sacrifices in the fire of the Supreme Brahman. 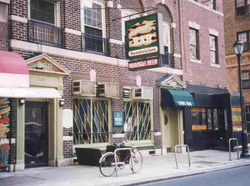 Others, who are interested in achieving self-realization through control of the mind and senses, offer the functions of all the senses, and of the life breath, as oblations into the fire of the controlled mind.  (Bhagavad Gita 4:24-27; emphasis added[i])

As I walked along, I mentally transmitted all the sights and sounds to Jesus, as though He were looking out through my eyes and hearing through my ears. As I walked along, exercising this “control of the mind and senses” by offering “the objects of the senses” into the fires of perception, I not only felt extremely close to the Lord, but I found my usual way of seeing people–a highly judgmental and evaluative way in which I am subject and everyone else is object–giving way to a compassionate mode of seeing as Christ sees. 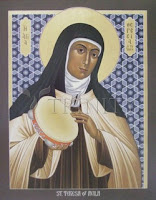 Icon of St. Teresa of Avila by Robert Lentz, OFM

“Christ has no body now on earth but yours,” wrote St. Teresa of Avila:

A faculty and its object are like the primordial couple. The relationship of the eye to what is seen is the relationship of Shiva to his shakti. The ear and music, the eye and art, the tongue and flavour, all senses and their sensations are a participation in the eternal embrace.[ii]

I have written before about how the body–and in particular the senses­–can be made the locus of divine service simply by an act of will by which we use them on God’s behalf. This act sanctifies both the senses and their objects, bringing us a greater awareness of the divine presence within and without, and preparing us to “be an instrument of [God’s] peace.” Going a step further, St. Teresa found such a dedicating of the senses to be a way toward divine union, in which Christ­–the “bridegroom” of her Carmelite soul–entered into her and lived His risen life through her:

I was reflecting upon how arduous a life this is…I said to myself, “Lord, give me some means by which I may put up with this life.” He replied, “Think, daughter, of how after it is finished you will not be able to serve me in ways you can now. Eat for Me and sleep for Me, and let everything you do be for Me, as though you no longer lived but I; for this is what St. Paul was speaking of.”[iii] (1 Cor. 10:31)


[i] Bhagavad Gita As It Is, translated by Srila Pradhupada
[ii] Dupuche, John, Towards a Christian Tantra
[iii] St. Teresa of Avila, Spiritual Testimonies. The Collected Works of St. Teresa of Avila, Vol. 1. Translated and edited by Kavanaugh and Rodriguez
Posted by The New Seminary at 1:12 PM No comments: