New Seminary's faculty member, Dr. Theodore Richards was honored recently with not one, but two awards for his writing.  Homebound Publishing announced within weeks of each other that Cosmosophia was awarded the Nautilus Gold Medal and that The Crucifixion won the IPPY Bronze Medal. 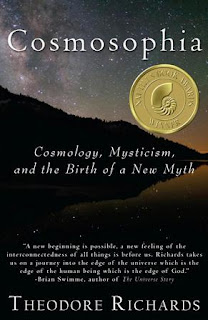 Theologian and author Matthew Fox said that
“Theodore Richards is a unique and gifted social activist, one with a well nour­ished brain as well as a con­science. His com­mit­ment to inner city youth wounded as so many are by a cul­ture that prefers con­sump­tion to com­pas­sion and preaches couch­pota­toitism over cre­ativity, he has spent years bringing alive the poten­tial of young people in finding their in-​​depth selves and their place in our amazing uni­verse. In a pre­vious gen­er­a­tion someone of Theodore’s depth and integrity might have worked out his voca­tion in a monastery. In our time, he finds his way in the urban world of struggle and promise, despair and hope. He is a philosopher-​​activist who lis­tens deeply and walks his talk.  What he is learning is worth our all lis­tening to.”

Cosmosophia: Cosmology, Mysticism and the Birth of a New Myth  is a guide for all those who are learning to connect to their inner wisdom. There is no wonder that this book won the Nautilus Gold Medal, an award shared by such notable authors as Deepak Chopra, Barbara Kingsolver, Mathew Fox, Eckhart Tolle and His Holiness the Dalai Lama. 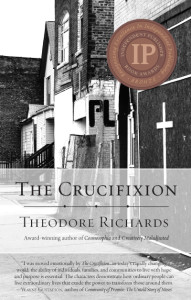 The Crucifixion is "a modern American myth," which takes readers on a journey through the Deep South and into urban America.  This epic journey reflects both Old and New Testament stories, but creates a new, modern perspective from which the reader may relate.

"I was moved emotionally by The Crucifixion. …In today’s rapidly changing world, the ability of individuals, families, and communities to live with hope and purpose is essential, but according to my observations, too rare," said author, Wayne Gustafson, (Community of Promise: The Untold Story of Moses). "The characters demonstrate how ordinary people can live extraordinary lives that exude the power to transform those around them.”

The IPPY Bronze Medal is an Independent Publishers award, which is given yearly.

Posted by The New Seminary at 2:31 PM No comments: